From various points of views zero contamination cleanrooms will be necessary in the next 5 years latest. Not only for the coming semiconductor production environments, but also for the nanotechnology and
biotechnology as well as bio-safety new requirements have to be defined. This affects not only cleanroom and clean air but also all other aspects of contamination control from ultrapure media to ultrapure surfaces to the measurements and monitoring of the contaminants and last but not least the control of the contaminations.

The today regulations the German VDI 2083 (6) and the international ISO 14644 (7) already address the requirements of the tomorrow applications. So it is discussed in the very moment to use even the wording
nano-particles in the guidelines.
Especially in the VDI 2083 all kinds of clean media are defined and described and even the ISO 14644, part 9, deals with clean surfaces. If one looks to the other predominant applications which need contamination control like:
• Semiconductor industries
We have reached now mass production on minimum structure widths of 30 nm and below. From the roadmap it is clear that we have to control contamination on the nano-scale and in the zero contamination regime
• Pharmaceutical and medical device industries
The drug particles get smaller and smaller to achieve more effective drug delivery and pharmaco dynamics. Medical devices must be nano and micro structured for their functional use in our body.
More and more pharmaceutical and medical devices get joined for the better drug application. Stem cells play an important role and will play a vital role for our future life and prevent of death. The stem
cells must be handled on even single molecular bases and from this view the requirements for the
living environment are even higher than for the today microelectronics.
• Biosafety
The highest probably for the humankind to die out is coming from epidemic and pandemic risks. For the one or other disease only one or a very few species can create illness and death. Also in the
high containment fields to deal with these creatures and understanding of Zero Cleanliness is vital for all of us. 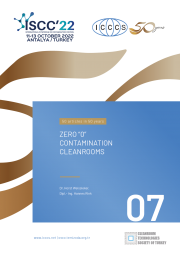