This study aimed to investigate the nitrogen purging of front-opening unified pod (FOUP) with nitrogen for 450 mm wafer which involves stringent cleanliness requirement of water vapor content (RH ≤ 3%)
within the container, besides airborne molecular contamination (AMC). A parametric study was conducted with factors considered to affect the extraction of water vapor content includes the
configuration of plenum injector, purging outlet and FOUP. Computational fluid dynamic (CFD) was employed and Langmuir adsorption models were used to construct physical models of contaminant
concentrations in the FOUP. The results showed that the configuration with nitrogen entering from the rear inlets and the front vent holes and porous ceramics plenum demonstrate favourable water vapor
depletion rate within the gaps formed between the wafers in a fully loaded FOUP. Elaboration of nonlinear fitting was applied to theoretical model and experimental data yields the desorption coefficient
Kd as 0.4 kg/s.

FOUP is a container that stores the wafer and is sealed airtight to shelter the wafer from contact with the clean room environment in the conveying process to prevent particle contamination. In each FOUP there
are a total of 25 pieces of wafer, and their positions are labelled from the bottom to the top in ascending order. In general, purging the FOUP with inert gas provides the following advantages: the wafers are
not easily oxidized, thus preventing oxide layers from forming on their surfaces, deposition of hydrocarbon compounds on the wafer surface is avoided, and the pollution of metal particles can be
avoided [1].
The technology roadmap toward miniaturization in semiconductor manufacturing leads more attentions towards yield-affecting factors from the air quality of manufacturing environment such as water vapor,
oxygen, water vapor and Airborne Molecular Contaminations (AMCs). The control on AMCs has been the major issue in the yields management of semiconductor production [2-4] as well as the most
noticeable water vapor and oxygen contents. With the transition of 300 mm towards 450 mm wafer manufacturing, the stringent cleanliness requirement of a 450 mm wafer FOUP is not only limited to
AMCs, but also oxygen and water vapor content (≤100 ppm and RH ≤ 5%) within the container.
Moisture vapor in a FOUP was reported as more difficult to be expelled than oxygen, due to the ingress of moisture vapor of the ambient air through the polycarbonate (PC) surfaces of the FOUP [5]. On the
other hand, through the computational fluid dynamics (CFD) study, it was reported that higher depletion rate of oxygen with the use of a plenum injector could be achieved compared to that without a plenum
injector [6].
Nitrogen gas was presented as an effective means applied in purging carriers in semiconductor manufacturing for reducing contaminants such as 300 mm wafer FOUP and photomask box [1,7,8].
This study aims to accomplish the following objectives: (1) to optimize purging gas inlet/outlet locations, and (2) to determine effect of varied inlet plenum design, and (3) to quantitatively identify the
desorption coefficient of water vapor content on FOUP surfaces. The desorption coefficient of water vapor content is then compared with those results of the 300mm wafer FOUP. 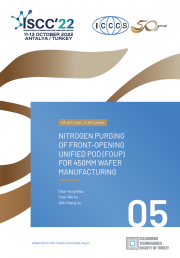